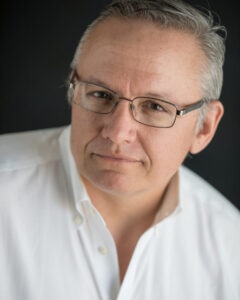 A marketing professional with over thirty-five years of experience, Mike started working as an errand boy in his family’s advertising agency while still in high school. After graduating from Southern Methodist University (Dallas, TX) in 1984 with a BFA in Television/Radio and Film Production, he began his professional advertising career at a small ad agency in Dallas, Texas. Soon thereafter he moved back to his hometown of Davenport, Iowa.

Within eleven years of arrival at the agency, he purchased the company and took over as its CEO and President.

In 1999, Mike worked with a number of other agency principals from around the world to re-structure the ECCO International Public Relations Network. ECCO now provides global public relations and marketing support services to a handful of multi-national clients.

Mike’s experience also includes time as an adjunct professor of marketing and advertising at St. Ambrose University and Augustana College as well as being a featured speaker and presenter at several national conferences and international conferences on branding and brand management.

In addition to his work for clients through Brand Central Station, Mike also serves as a principal in the PR firm, Bawden Lareau Public Relations and as the mayor of his hometown, Riverdale, Iowa.

Mike has four children, a multitude of hobbies, a passion for jazz, an interest in history and a very understanding wife.