At 94, is Macy’s Thanksgiving Parade nimble enough to out-maneuver COVID-19? 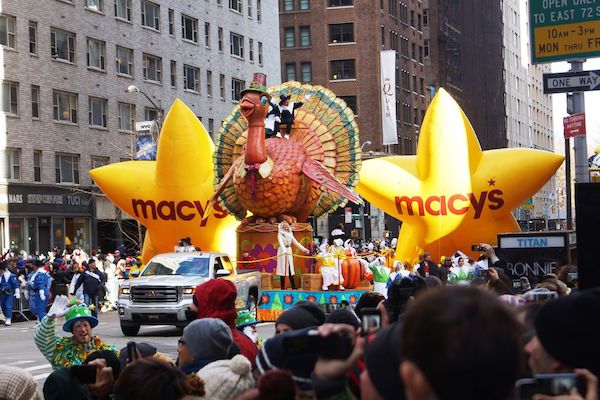 Macy’s – the world-famous retailer responsible for the Thanksgiving tradition of floating giant balloons through Manhattan to herald the beginning of the holiday shopping season – announced today that it would be altering the format of this year’s event due to the COVID-19 outbreak.

As reported in today’s DEADLINE, there will be no parade route, no kids, and the traditional balloons will be tethered to special vehicles. This all coming from NYC mayor Bill de Blasio who made the announcement earlier today (September 14, 2020).

The event – billed as The 94th Annual Macy’s Thanksgiving Day Parade – will air on Thanksgiving from 9am to noon, in all time zones.

According to a statement, the event will include the fantastic floats, street performers, clowns and balloons parade-watchers have come to expect. Santa is still expected to arrive at the end of the show, as well.

The public health concerns presented by the coronavirus epidemic that ravaged New York City this spring has resulted in a number of other changes to the usual parade. No participants in the event will be under the age of 18 years and everyone working on the parade (including performers) will be appropriately distanced from one another.

The high school and marching bands scheduled for this year’s parade will be deferred to 2021 and the hundreds of balloon handlers will be replaced with specially rigged vehicles approved by the NYC Department of Transportation and NYPD.

Macy’s worked with the City of New York to come up with a plan that conformed to the Centers for Disease Control (CDC) guidelines and has positioned the re-tooled event as a responsible alternative to the traditional parade.

“The Macy’s Parade is our love letter and a gift to the City of New York and the nation. Under the unique challenges of these unparalleled times, we felt it was important to continue this cherished holiday tradition … [and] bring joy into the hearts of millions across the nation.”

Although it was announced today, the change to the venerable parade does not come as a complete surprise. Over a month ago, following the conclusion of the successfully reimagined Macy’s 4th of July celebration in the Big Apple, Mayor de Blasio and the department store prepped New Yorkers for the upcoming change to the Thanksgiving celebration.

“Some is going to be virtual, there might be some small in-person pieces, spread out pieces, it’s not going to look at all of course like how we are used to. But the important thing is the traditions will be kept in some way.” – Bill de Blasio on the upcoming changes to the Macy’s Thanksgiving Day Parade

Of course, announcements like this are the first step in actively managing expectations and setting the stage for a successful transition.

Re-Positioning the Macy’s Brand Amid the Pandemic

While the parade has consistently been a keystone to the Macy’s brand, the retailer is still fighting the effects of the COVID-19 pandemic on multiple fronts. On a recent earnings call (reported in Adrianne Pasquarelli’s story in AdAge), Macy’s CEO Jeff Gennette emphasized the importance of the store’s events but noted that they had to change:

“We are re-imagining our iconic events to deliver the magic of the holidays, from the Thanksgiving Day Parade to local tree lightings and holiday windows.” Whether or not that will make enough of a difference to Macy’s brick-and-mortar operations will remain to be seen.

The company cut nearly 4,000 corporate jobs in June following a March furlough that saw over 100,000 store employees exit. In-store sales for the most recent quarter are down while online sales have increased over 50% for the same period.

But will those cost-cutting measures and emphasis on virtual operations during the pandemic reinforce or undercut the growth strategy proposed by the retailer in February? So much of that announced plan (the Polaris growth strategy) relies on strengthening the perceived equity in the Macy’s, Bloomingdale’s and Blue Mercury brands.

Only time – and a robust holiday shopping season – will tell.

Our Most Recent Posts